Watching NFL football is one of my favorite things. Better yet, NFL tailgates are the best. Though I won’t be in Atlanta for the Super Bowl, I’m thinking tailgate and especially good times at the Michael Mina Tailgate at Levi Stadium.

I confess to be a loyal San Francisco 49ers fan though they sit at the bottom of the gridiron heap. The rationale behind this somewhat irrational obsession is my relocation to the Bay Area in the ‘80s when the 49ers were on top of the football world with Joe Montana. Later at a tailgate at Candlestick Park, I was thrilled to meet the great Dwight Clark of “The Catch” fame whose reception from Montana propelled them to their first Super Bowl win. I’ve also tailgated with some true “red” 49ers fans before a game at the newer Levi Stadium. 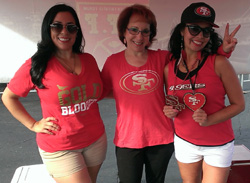 But as time went on, the 49ers have hit rock bottom, and my favorite tailgates have generally become indoor affairs at friends’ houses. But occasionally I’ve had the opportunity to root for the team—and nosh —at the Michael Mina Tailgate. Yes, Chef Michael Mina of over 40 restaurants around the world with 4 more planned for 2019—and a very gracious person. 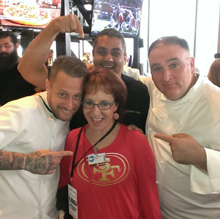 With José Andrés and Michael Mina at Mina Tailgate.

Forget the bad weather, order up the beer, and see what’s on the menu from Mina and his pals who commune and cook at Mina’s Bourbon Steak and Pub turned into an ultimate tailgate venue at the stadium. This weekend the restaurant hosts a watch party for the #BigGame.

Mina invites chefs from the visiting team’s city to dish up specialties for the day. In 2015, I was happily embraced by Michael Mina (behind me) and José Andrés (right) of Washington, D.C.’s Think Food Group restaurants who supports those in need of food such as Puerto Rico hurricane victims and government shutdown personnel. 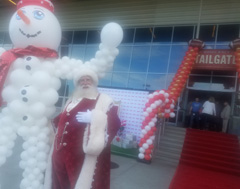 Santa greeted us at the door when I returned to Mina’s Tailgate two days before Christmas, 2018. The tailgate opens early. So early that the coffee is hot and the pastries warm when you pass security into the entrance. 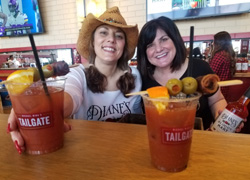 Also open early is Mina wife Diane’s Bloody Mary Bar. I visited with Diane in 2015 when she first opened the bar. I was pleased to reconnect with Diane and discover that she is selling her Bloody Mary Mixers through Williams Sonoma.

I tried a Bloody version never ventured a Dirty Diane with Del Maguey Vida Mezcal which was savory, smoky and delicious. The Gold Rush, playing off the 49ers name, with Four Roses Bourbon sounded creative as did the Bloody Dutchman with Death’s Door gin. The non-alcoholic versions are eye-openers will all the fixings, too. The bacon-wrapped date on the garnish adds an unusual bite.

The bar has a good array of beer including 49ers Red Ale. Winemakers join the tailgating and in December, the McBride Sisters Winery served up some delicious New Zealand Sauvignon Blanc and Calif. Central Coast. 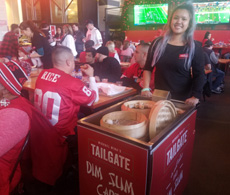 I was delighted to see the unexpected dim sum cart roll by with some delicious shrimp, pork and vegetable delicacies. 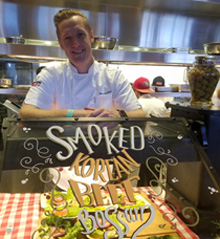 Soon, the food lines open, and what a trial—what to eat first. Mina invites chef friends and a chef from the opposing team. For this tailgate, he invited a chef from International Smoke.

Given that the owner of the restaurant, in collaboration with Mina is Ayesha Curry, the wife of Golden State Warriors star Steph Curry, the smoked Korean beef served up by Curry’s Executive Chef Jeremy McMillan paired well with the Mescal.

I then moved on to some traditional dishes like Chicago-style Big “Mack” rotisserie prime rib made by Chicago star Chef Doug Psaltis of RPM Steak and RPM Italian. I shared a table with Brian and Jody who had traveled from Chicago for the game. Wearing Bears blue and orange, they were pleased with their familiar RPM items served and thought the Mina Tailgate was a fine way to prepare for the game. Which the Bears did win. 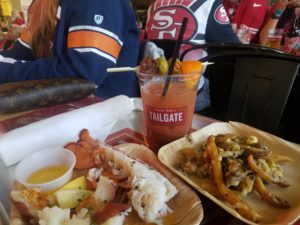 But I tucked into gourmet items from Mina’s lobster to foie gras poutine (French fries with gravy). I normally can resist French fries, but not this version. The light touch of foie gras gave an incredible and creamy savoriness.

The foie gras is produced by Mina’s friend Chef Michael Ginor who is the founder of Hudson Valley Foie Gras and owner of Lola restaurant in Great Neck, NY. Ginor met mina when he was a young chef at Aqua restaurant in San Francisco. Foie gras is a favorite ingredient of Mina’s, but Calif. is back legally banning foie gras, so no more served here for a while.

By the way, there are seats outside. But I liked watching the pre-game TV shows on the many screens. With a full tummy, I was ready for the game. But in this case, the Bears won. Yes, the 49ers lost. But the tailgate was certainly a fine time for Diane and me—and the cheerleaders. May the best team win! 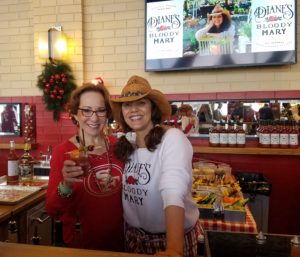 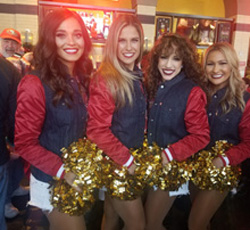