When the music turns to zydeco and paraders start dancing, you know Mardi Gras day has arrived. Add beer and jambalaya and the party begins.

Southern food-inspired Town Hall restaurant in San Francisco packed all this in and more into their annual Mardi Gras party. The fun-timers turned the restaurant into a virtual town hall of regular patrons, local luminaries and happy newcomers.

After surviving fives years of Mardi Gras revelry while living on the Gulf Coast, I know the ingredients for these pre-Lent parties. 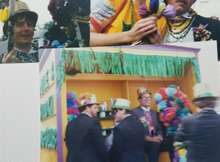 The mix of cultural heritage, hospitality and food obsession for gumbo have stuck with me. I’ve returned to the Gulf Coast for more Mardi Gras smiles and drinks at the bar on the back of a truck float.

Thanks to Town Hall, I enjoyed the colors, sounds and tastes on Mardi Gras evening. But Mardi Gras is anytime in New Orleans. I attended a July wedding with a full-on Mardi Gras party replete with Rex, King of the Cardinal, and a grand summer fête at Mardi Gras World during an industry cocktails conference.

Feeling right at home at Town Hall, I headed for the open bar with coolers of Hurricanes, a category 5 dangerous drink. My one visit to the open was for a mellow Leblon Caipirinha. Why not a Hurricane? Well, my forays into New Orleans’ hurricane territory are another story. 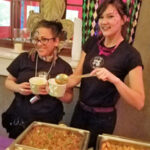 This Town Hall Mardi Gras party was the 15th annual hosted by owner Mitchell Rosenthal. His face-painted staff was ready with the shrimp and grits and jambalaya, along with healthy, California-style broccolini.

The back patio hosted heated tents and the barbecue grill where tri-tip and St. Louis-style ribs were dished up. I headed back inside for their famous fried chicken.

Mardi Gras celebrations began in medieval Europe. Early settlers in Alabama and California brought their Mardi Gras traditions with them. By the 1830s masked residents of New Orleans rode in carriages or horses down streets lit by gaslight torches. Float-making evolved into an art form for Mardi Gras.

Not every Mardi Gras has floats, but many parties have bars. Alcohol has been part of these Mardi Gras celebrations for centuries—a last drink up before giving up or reducing their consumption during Lent. As the band warmed up, I dug into the big bucket of cold brews which owner Mitchel Rosenthal stocked from Louisiana’s Abita brewery. My one Abita Purple Haze matched the crazy Mardi Gras vibe. I headed for the raw bar and discovered that Rosenthal’s tattoos matched the mood, too, along with the Louisiana crawfish boil he encouraged me to try. 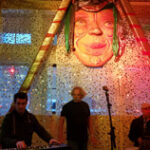 Music has always been a key element of Mardi Gras. The Joe Cohen Show featuring Wil Blades arrived under the warm glow of the Mardi Gras personage. The party vibe accelerated as Wil Blades segued from jazz segued to zydeco music.

Mardi Gras, gumbo and crawfish are not on the menu every day at Town Hall.

But I look forward to more upbeat encounters with the staff, more andouille sausage jambalaya, barbecue shrimp, buttermilk fried chicken with buttermilk waffles, and St. Louis ribs. But I’ll miss the happy painted Mardi Gras patrons. Let’s face it. There’s a strong dose of childhood fun in the air when we get painted.

There’s so much to learn about Mardi Gras traditions. This year I heard about the meaning of the Mardi Gras color theme: Purple for justice, gold for power and green for faith. I have faith in a future where justice prevails and everyone can unleash the power of their voices to speak for worthy, humanitarian causes.

In the meantime, I may wake up more often and think, “Today is going to be a Mardi Gras kind of day, minus the Hurricanes and face paint.” 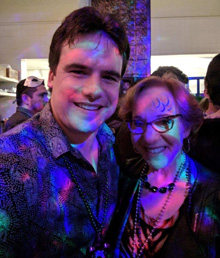